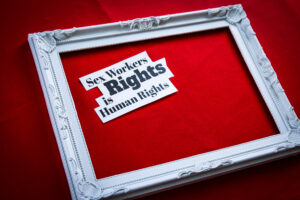 Sex workers, our allies, Respect Inc and our peak body Scarlet Alliance have argued for decades that police cannot be the protectors of sex workers while we live and work under harsh criminalisation, entrapment, and penalisation for basic work, health and safety strategies.

Filming any women secretly should be treated with contempt in Australia. Doing so and then screening it on national television is not excused by faux concern for sex worker working conditions.  Sex workers deserve to be safe from media and police targeting for entertainment and police public relations.  This targeting by 60 Minutes and Major Organised Crime Squad MOCS, portraying all Asian workers as victims of slavery and trafficking makes it impossible for workers to seek assistance for any workplace violations or when they are victims of crime.

Queensland Major Organised Crime Squad (MOCS) Detective, Brad Phelps, asserted that his work is aimed at stopping exploitation. In fact, this Detective and his colleagues have for years targeted Asian background sex workers who speak English as a second language or who are migrants for undercover stings.

No evidence was presented to justify the assertion that these workplaces were sites of exploitation. Weak links were made to persons in other states who have been previously charged for organised crime in the UK.

Respect Inc are extremely concerned about the conflation of sex work and trafficking.

The early 2000’s saw similar sensationalist and inaccurate media reporting that portrayed Asian background migrant sex workers in brothels as exploited, trafficked and forced into sex work. The outcome was bad policy and extensive raids on sex worker workplaces that resulted in no benefit to sex workers and did not detect the alleged widespread trafficking or exploitation. Instead, this community was marginalised and stigmatised.

Respect Inc will continue to campaign for full decriminalisation and an end to entrapment tactics used by MOCS and other QPS officers.

Respect Inc is the statewide sex worker organisation in Queensland. This complaint is regarding the Channel Nine 60 Minutes episode 36 titled “Trafficked”, aired nationally on Sunday 30 October 2022. The Respect Inc complaint alleges this episode is not accurate or fair, and it fails to respect the privacy of Asian background and migrant sex workers in Queensland who are filmed without their consent.

Additionally, the episode makes a series of statements in the opening of the show, which Respect Inc asserts are deliberately misleading and inaccurate about the scale of organised crime and ‘‘human exploitation’’ in suburban motels: “It’s no doubt it’s uncomfortable to watch. And what you are seeing is more than just a sleazy transaction. Behind the doors of suburban hotels is a hidden story of organised crime and human exploitation. And it is happening all over Australia.” These statements imply that Channel Nine is about to show the phenomena of organised crime and exploitation in suburban hotels, but it does not actually do this. The Channel Nine introduction is based on conjecture, assumptions and some loosely circumstantial evidence, but nothing in the 60 Minutes episode is strong enough to back up the opening assertions.

Using the term ‘sleazy transaction’ is discriminatory and vilifying. Sex workers in Qld have anti-discrimination protections under the law and it is possible Channel Nine have breached this.

The episode fails to be accurate because it shows specific incidents of private sex work conducted by Asian background or migrant sex workers in Queensland and implies these incidents are linked to, or are evidence of, the federal crimes of trafficking and slavery. There are two police officers on the episode, one alleges there is trafficking actually occurring in these specific incidents, the other (AFP) describes the crime of trafficking and debt bondage but does not specify if she is alleging these specific cases in Queensland motels are trafficking and debt bondage, or if she is just speaking more broadly. The anchor journalist repeats the implication of exploitation and trafficking about these particular incidents without telling the viewer that the link between the sex workers filmed on the show and trafficking is not proven. At around five minutes into the episode the journalist refers to these incidents and asks a police officer “Are you surprised to learn this syndicate activity, this trafficking, this exploitation is still going very, very strong,” and in doing so inaccurately describes Asian-background or migrant sex workers as experiencing trafficking, exploitation, and/or being linked to ‘syndicates’.

The episode shows a Channel 9 journalist assisted by ‘undercover agents’ looking at a website and then calling sex workers to make fake bookings. After a text response, a common strategy used by independent sex workers  to cut down administrative burden, the journalist says “Critical thing now is we have a motel address. Motel, syndicate. First call and we’ve cracked them! They are obviously acting with impunity”. This statement by the journalist is not accurate. The practice of securing a booking with a specific private Asian or migrant sex worker in Queensland in a motel is not evidence of an illegal syndicate, trafficking, or exploitation. Private sex work is lawful in Queensland, including from a motel. Implying that these specific Asian background or migrant sex workers are acting unlawfully is not accurate.

It is illegal in Queensland for two workers to work from the same motel or to use a booking or reception service; however, this also is not evidence of trafficking. In fact it is common practice. The Queensland crime is for working together or hiring a receptionist, and is not in any way related to, or evidence of, the federal crimes of exploitation or trafficking. The implied link between a state law that makes working in the same motel illegal or hiring a booking agent or receptionist which criminalises the individual private sex workers, and the federal law that makes trafficking illegal and criminalises third parties, is not accurate and lacks clarity. Additionally, 60 Minutes chose not to explain the difference between these state and federal crimes, and this omission, we believe, constitutes unfairness and lack of balance in the presentation of the story.

During the undercover activity the episode dwelt on the fact that a sex worker used Google Translate to negotiate the (fake) booking. The episode is not accurate because it implies use of Google Translate as evidence of something malicious or illegal. By merit of the sex worker having and using her own phone to negotiate directly with a (fake) client it is unlikely that this person is being controlled by a third party, or trafficked, or exploited. The implication made by 60 Minutes about use of Google Translate and evidence of illegality is not accurate.

The episode is not fair or balanced because it only interviews people who have already formed an opinion about a theoretical link between Asian background or migrant sex workers and trafficking and exploitation, and does not interview any people who have a different opinion, even though the journalist was aware of these views. In Australia and internationally the episode could have drawn upon experts in the field who dispute this link, including sex worker spokespeople in North Queensland who have personal and professional knowledge about the motels shown and police work described on the episode.

The episode is not fair or balanced, and reports inaccurate information in the statement by the anchor journalist in or around 5:13 “Brad Phelps and his team stumbled across the ‘Motel Sex Syndicate’ in 2019”. Major Organised Crime Squad (MOCS) actually began their targeting of Asian background and migrant sex workers in these motels in 2018. If 60 Minutes had interviewed Respect Inc, the accuracy of the MOCS statements could have been countered, or at least created context for what we suggest are potential untruths promoted deliberately by MOCS on the episode.

The episode interviews a sex worker who experienced trafficking many years ago in Melbourne and is now based in South Korea, and in this case the person is clear that they had experienced something like trafficking. That interview complements the other opinions in the episode, but does not make the episode fair or balanced. For the episode to be fair, there should have been interviews with people who have direct experience in and knowledge of the private sex work sector in Queensland in the type of motel locations illustrated in the show. Those interviews would bring alternative opinions and facts about the specific police operations at those locations, dates and arrests, and would possibly have made the episode fair. Respect Inc is one organisation with that knowledge, Scarlet Alliance is another. Sex worker representatives from Respect Inc have repeatedly raised with QPS in North Queensland, the Queensland Police Commissioner, the Queensland Attorney General, the Queensland Police Minister and others the problematic nature of MOCS raids and undercover operations at motels known to be frequented by sex workers. This includes the arrest of two sex workers who were isolating on location at one of these motels during COVID, causing them to be charged for sex work offences while not working and following Chief Health Officer advice. Respect Inc is complaining that human rights abuses by undercover police including MOCS around Queensland at these types of motel locations were not explained on the episode and this constitutes a lack of balance or fairness in the reporting. Sex workers, Respect Inc and our allies (including more than 40 other not-for-profit organisations and agencies) argue that the police powers must be urgently repealed due to the malicious and targeted nature of police operations on Asian background or migrant sex workers in known motels.

This episode fails to respect privacy and fails to avoid harm. One sex worker’s full face was shown on an online ad on the episode. Showing their face on an escort ad that is buried online is a different scale to having one’s face shown on national free-to-air TV. This exposure can cause them to become subject to criminal charges and ostracism in their home countries.

The episode fails to respect the privacy of the specific Asian background or migrant sex workers working in motels in Queensland. The episode shows the journalist and ‘undercover agents’ making fake enquiries and bookings with Asian background or migrant sex workers in motels in Queensland and then filming those sex workers without their consent. While the (scraped) advertising is available to the public, the individual text messages from a sex worker to a (fake) client are not. That content could be thought of as private communication, and by showing it on the episode the sex worker’s privacy has not been respected. The episode shows non-consensual footage of these Asian background or migrant sex workers in their work clothing and in their own motel rooms, then uses this footage to imply debt bondage, trafficking and exploitation, without letting the sex workers know they are being filmed. Respect Inc asserts that this failed to respect their privacy and did not uphold the principle of avoidance of harm.

For 60 Minutes to address this complaint, Respect Inc requests that a correction to the inaccuracies be stated on the next episode of 60 Minutes by the journalist anchor, and a spokesperson from Respect Inc or Scarlet Alliance be given four minutes of airtime to put forward our position.

Additionally, even though perhaps outside the scope of Complaints under the Commercial Television Industry Code of Practice, Respect Inc raises concerns about the judgmental, insulting and ignorant descriptions of the motels shown in the episode. Given the current accommodation crisis in Australia, describing suburban hotels as ‘dives’ and including the comment from a police officer that the class of motel is a ‘key indicator’ of trafficking, without alternative views being sought could be construed as discriminatory.