Media Release: Respect Inc 8th March 2017 “Nothing about us without us” | Respect QLD

Media Release: Respect Inc 8th March 2017 “Nothing about us without us” 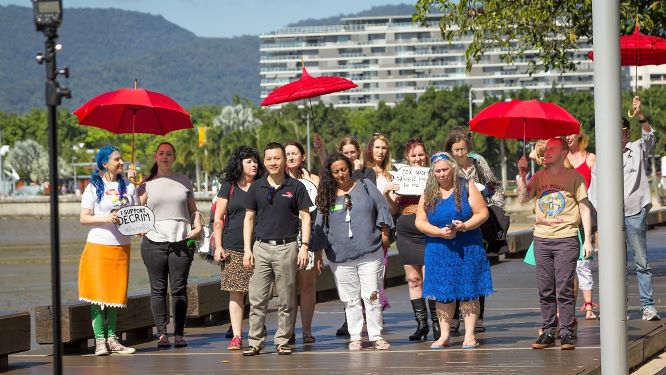 We are Queensland sex workers united to provide a voice for sex worker issues to improve the rights of
our peers to workplace health and safety.

Respect Inc is funded predominantly by Queensland Health and we are proud sex workers providing
support to our peers through information sharing.

We are gathered in Brisbane at Parliament House today to demand consultation by the Labour
government. We advocate for Queensland legislation to be written with full consultation and expect that
there will be nothing about us without us.

Open consultation with sex workers will ensure that the legislation we work in reflects our needs. Lack of
consultation has led to an industry model that is failing economically and is not achieving the underlying
principles of the current legislation as claimed by the current government.

Due to stigma and discrimination, many sex workers are not able to publicly advocate for our needs yet
today some gather publicly to make their voices heard. Sex workers need a review that supports our
participation rather than ignoring us!

More than 9 months later the Office of the Honourable Yvette D’Ath MP, Attorney General, has
responded to our concerns by saying that ‘given other priorities the Attorney General does not propose
to progress consideration of the issues.’

The government has responded to the reform of other unjust laws during their time in office but sex
workers are being ignored. Respect Inc calls for a consultative review of the legislation with a view to
full decriminalisation of all forms of sexual services