Respect Inc appeared before the Legal Affairs, Police, Corrective Services and Emergency Services Committee’s public hearing on Tuesday 4 October 2011 for its examination of the Police Powers and Responsibilities and Other Legislation Amendment Bill 2011. We also submitted a written statement regarding the effects of the laws on sex workers in Queensland.

These documents present the written submission and the Hansard transcript of the proceedings discussing interactions between sex workers and the police. 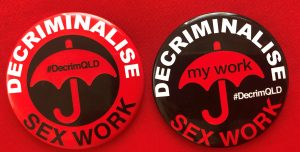